Backhoe loaders, the reliable digging and loading machines, are used in a wide variety of construction and civil engineering environments. They are able to perform a vast array of jobs, hence their being regarded as a solid and dependable ‘workhorse’ for:

History of the Backhoe Loader

The development of backhoe loaders occurred simultaneously in the USA and the UK.  They were initially tractors, onto which enterprising designers added swing arms and loaders, both of which were detachable. It was only in the 1950s, that the first unit was designed (still based on a tractor), where the loader and swingarm were permanent parts of the machine. This was followed by the patent for the reversible seat enabling the operator to work in the correct direction while utilising either the loader or the swingarm.

The term ‘backhoe’ refers to the direction in which the bucket is utilised – when the equipment ‘pulls’ the material it is working ‘backwards’. If the material being worked is lifted ‘forward’, that is referred to as ‘shovelling’.

What are Backhoe Loaders used for?

Since backhoe loaders are based on tractor functionality, they have the ability to be moved around rough terrain with ease.  They usually have basic driving controls, such as a steering wheel, brakes, very large tyres and a diesel engine which makes them adaptable to any environment.  The cabs are usually enclosed and strengthened to protect the operators from the weather and loose debris.

At the rear of the unit is the backhoe (a small excavator boom, arm and bucket). This is utilised for traditional digging, lifting, and dropping materials as needed.  The boom has a unique S-shape to allow the machine to move more easily around obstacles while carrying a bucket which is full of materials.

Stabilising legs hold most of the weight of the unit while digging, in order to prevent pressure causing the machine to bounce or to prevent the tyres from falling into the excavation being dug. The stabiliser legs have padded1 shoes for asphalt and grouser2 shoes for dirt.

Versatility is a key benefit when using a backhoe

As the backhoe loader is able to carry out the role of at least two pieces of equipment, as well as the ability to be driven on roads without causing damage to the tarmac or paving, this machine has become increasingly popular worldwide and particularly in Zimbabwe, where much construction is currently taking place.  It is both cheaper and easier to have one machine which can do multiple tasks, rather than buying two different units which may be required on a site, especially for small and/or fiddly jobs.  Another advantage of using a backhoe loader is that additional tools, such as hydraulic hammers and augers, can be retro-fitted and this further increases its versatility.

Construction owners or site foremen looking for a machine capable of both digging and loading, find that the Komatsu WB93R-5E0 backhoe loader is the perfect solution.  This machine is the mainstay of small to medium sites and deliver the expected Komatsu high standards of:

The Komatsu WB93R comes with innovative and technical solutions, plus a wide choice of optional equipment, all with a cab designed for operator comfort and excellent visibility.  This unit delivers high breakout force and lifting capacities, including optimal parallel lifting. 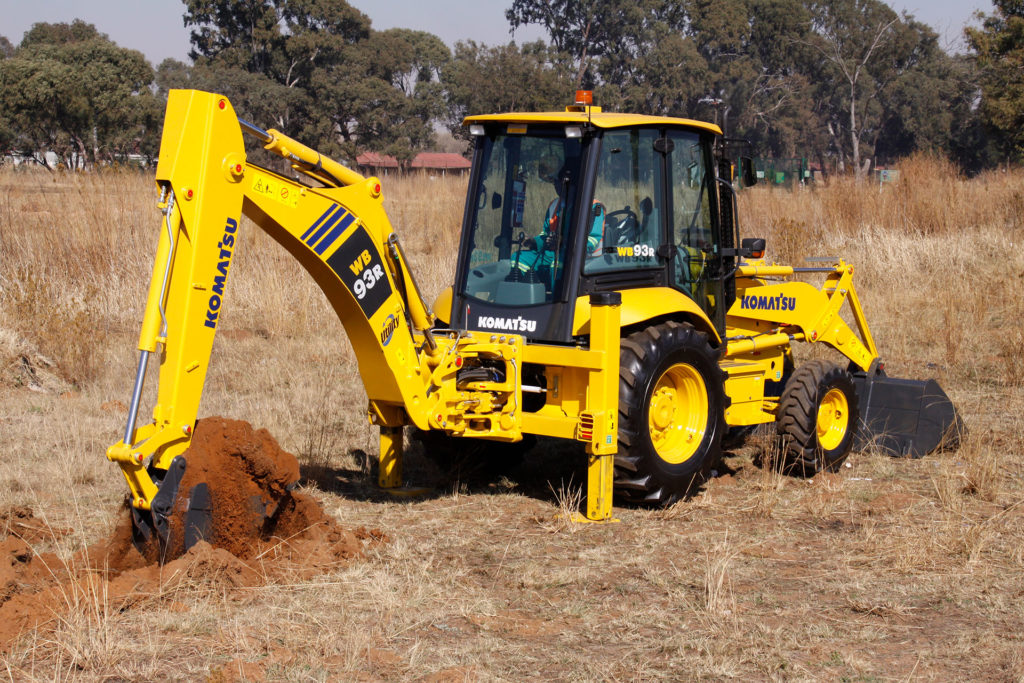 Komatsu is a global leader in the supply of Japanese-engineered mining, construction, earthmoving and utility equipment in Southern Africa. The MoJo Motor Industries (MMI) Team comes with over fifty-four years of combined experience in automotive, construction and mining equipment sales and support. MMI is the official Komatsu dealer for Zimbabwe. Please direct all your pre-sales or equipment enquiries on construction loaders to our friendly staff.

1 a padded shoe includes the rubber pad on top of the steel plate.

2 a grouser shoe is intended to increase the traction of continuous tracks, especially in loose material, such as soil.