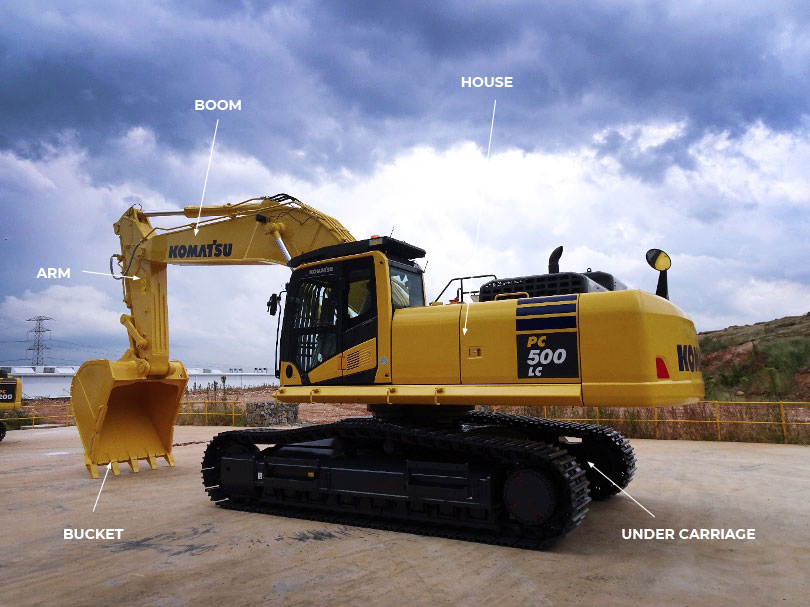 An excavator is a large construction machine made for digging into the ground with its bucket to extract earth or other material to create trenches, holes and foundations. It usually runs off diesel fuel and, depending on the size of the equipment, can be used on a medium to large job-sites.

Common uses of a hydraulic excavator

Some examples of these activities are:

The load capacity of hydraulic excavators depends on the size of the equipment, which ranges from mini-excavators which can manage under 7 tons, to large units which work with loads of 45 to 80 tons.

Where does a hydraulic excavator’s power come from?

Excavators are powered by diesel due to the extreme efficiency from maximum horsepower being obtained from the engines.  The tracks and the hydraulic pumps used to raise and extend the excavator’s arm are powered by the diesel engine.  The forward and reverse movements of the unit, as well as that of the arm, are all controlled from the operator’s cabin via various pedals and levers.

Tracks are made of multiple components which become ridged once fitted to the excavator.  The tracks (made up of track shoes bolted together into a circular track) surround the gears which receive their power from the engine via the driveshaft.  The tracks move the digger in a straight line, backwards and forwards when the gears are engaged.

The excavator is turned by the operator stopping one track in place and moving the other track which spins the entire unit around.  A very experienced operator can even turn the unit in a tighter space by engaging ‘reverse’ on one track and ‘forward’ on the other, which is a great accomplishment.

How does the excavator arm move?

The arm movement on excavators is 100% hydraulically controlled.  The excavator’s arm forms part of the lower frame chassis.  The arm consists of two sections – the boom (the section from the excavator to the arm) and the arm (from the boom to the bucket) which are joined by a hinge.  Both arm and bucket are controlled by three separate hydraulic cylinders, which operate together to allow the arm to extend and retract.

Komatsu Excavators for all sizes of job sites